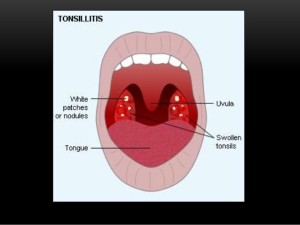 The tonsils – two oval shaped little pods located in the back of your throat – act like air filters for the beginning of your respiratory system. They are designed to catch and trap germs and viruses that would otherwise enter your lungs and cause infection. They also release antibodies and aid in fighting off infection. Sometimes, though, the tonsils themselves are overwhelmed with the germs it filters out, and become inflamed and infected themselves. This is the onset of tonsillitis, and it is a common occurrence that happens frequently in many who become sick with a cold. In fact, when most people claim that they have a sore throat, what they really mean is that their tonsils have become inflamed, a la tonsillitis.

There are many ways to treat tonsillitis. Most treatments include acetaminophen or ibuprofen, which are both anti-inflammatory agents designed to aid the body in fighting off infection. They are a staple medicine in many households because they are very prevalent in basic over the counter medicines. Another way to treat tonsillitis lies in the corticosteroid dexamethasone. Corticosteroids are chemicals that occur naturally in the body, secreted by the adrenal gland. Dexamethasone is a man-made, but otherwise identical, corticosteroid.

While some infections are generally more bearable than others, and register as a mere annoyance, others, such as strep-throat, can cause a pain so severe that swallowing water becomes a difficulty. Dexamethasone is a very potent anti-inflammatory agent that is used to treat many conditions, including many types of arthritis, Crohn’s disease and even asthma. As it turns out, oral dexamethasone is a very effective way with which to treat a tonsillitis. While acetaminophen or ibuprofen can take up to twelve hours to reduce pain to a more bearable level, it has been found that people suffering from tonsillitis treated with dexamethasone can experience pain relief that is much more complete, and in some cases experienced in a mere six hours, cutting the time between administration and relief in half compared to acetaminophen or ibuprofen. Dexamethasone for tonsillitis is typically reserved for more severe cases of tonsillitis, such as strep-throat, as stated above.

Dexamethasone for tonsillitis does have its downside, though. For one, dexamethasone is a prescription only drug, which may make getting your hands on it a little more difficult than ibuprofen. Dexamethasone also suppresses the immune system, meaning that it will hamper your body’s natural ability to fight off an infection by itself. The drug should be administered in conjunction with other, infection fighting medications. These hurdles in administrating the drug the most effective way possible might explain why the public at large has not adopted using it for the common cold, as ibuprofen or acetaminophen is much more cheaply and readily available.

“I have a severe tooth pain. Can I apply dexamethasone?“